Seek the Peak of Vancouver, Canada 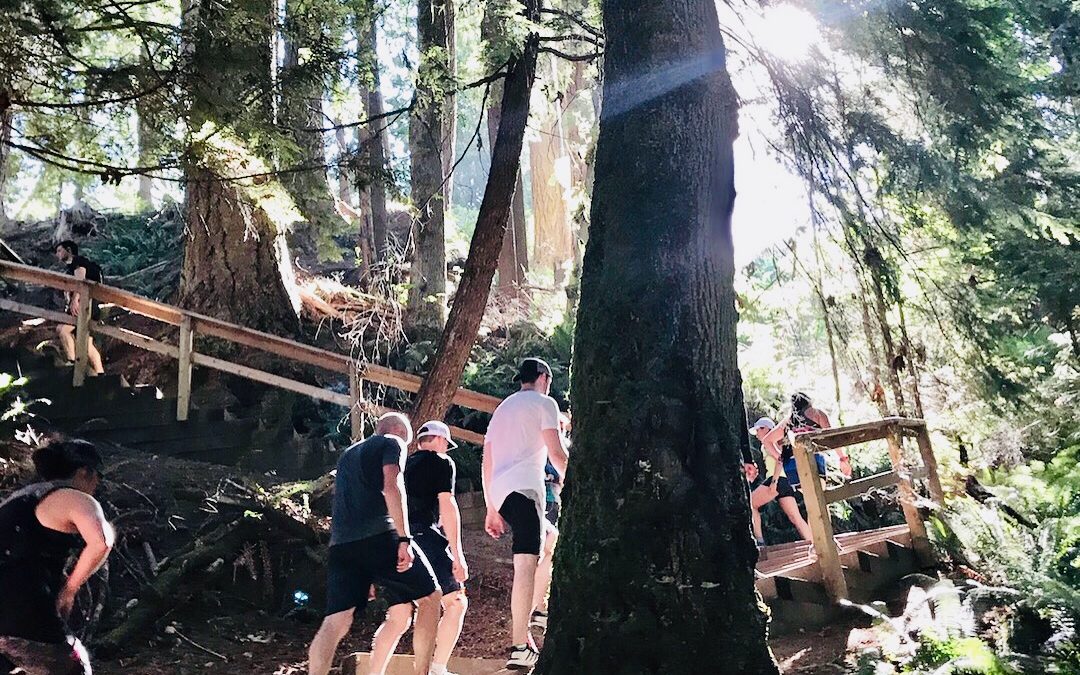 I registered for the Seek the Peak race with a challenging 1,400-meter incline over a deceivingly short 14-kilometer distance. It was inspiring to be part of an adventurous event that fundraised and heightened awareness for the BC Cancer Association and Breast Cancer.

There were 2 reasons that drove me:

Foremost, I raced for my superhero friend. Watching a loved one face cancer with integrity and determination has taught me about the power of positivity.

I clawed, fell, and maneuvered my way to Vancouver’s local mountain peak with exasperated breaths, blood running down my hand, muscle cramps thinking of my dear friend’s demeaning battle with cancer and his inspiring strength. My run was a fun personal competition, and not a battle for life.

I often visited my pal’s bachelor pad well before he was diagnosed with a rare cancer. He would serve me a cuppa of tea while he shared crazy stories of girls who fell head over heals in love. My mate was gleeful explaining how his harem loved when he outfitted himself in Marvel costumes. I thought it was absurdly ridiculous. As I watched how he dealt with adversity, truly believing in his super heroism, I realized I was the fool not buying in. From the beginning of my friend’s diagnosis progressing to his lengthy hospital quarantine, surgery and chemotherapy treatment, he never wavered from his superpower beliefs. He would overcome a rare form of cancer with a lion’s roar. He knew what the arduous process entailed as his younger brother had succumbed to the vicious disease years earlier after a lengthy battle. I never heard any doubts or negative words..

Throughout the morning, I thought of my chum’s tenacity. “I can. I will.”

Secondly, I have always been a glutton for punishment. It was a “sick kinda fun” physically taxing myself on a grueling course highlighting Vancouver’s West Coast landscape elevating from sea level (Ambleside beach) to the summit’s blue skyline (Grouse mountain).

The enthusiastic registrants travelled upwards on dusty dirt trails along the Capilano River to the Cleveland Dam water reservoir, only to be greeted further by North Vancouver’s steeper Nancy Greene/Capilano main artery. The racers earned the bragging rights reaching the Peak of Grouse Mountain finish line via the relentless steps. 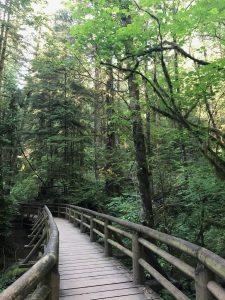 The race did not start at the advertised time of 8:15 am. I originally planned to bike to the start as a warm-up, but at the last minute, thought it would be overly-ambitious. What if I could not walk after the race? Instead, I drove to the mountain gondola parking lot, and lackadaisically watched the shuttle depart. I had ample time to stretch before catching the next bus to the start line. I was first in-line, but became anxious as the participants multiplied as it approached 8 am. I eavesdropped in multiple conversations; runners indicated they would drive to the start abandoning the bus option. My anxiety reached a crescendo. I was going to miss the race start.

A race coordinator finally alerted the group that the sponsors were delaying the start time as the bus was caught in road construction. I was relieved, but wondered, “how much bloody roadwork could be occurring on a Sunday early morning?” I rushed to the washroom praying I would not miss the transportation’s arrival. My bladder was heavy from over-hydrating.

When the shuttle finally arrived. I sat beside a tall athletic man who shared his plan of attack. He would conquer the Seek the Peak at his own leisurely pace. I was dubious about his relaxed mentality, and even more so, when he admitted he was a trail runner. Sure enough, his long legs eloquently strode by my awkward steps an hour later near the rugged mountain entrance.

Finally, it was gun time. I did not have any choice, but to take a slower pace. My left thigh felt tight and uncomfortable from overtraining. I had completed excessive hiking and running the weeks prior. It did not help that I had fallen off my bike, and again descending the Stawamus (Squamish) Chief Mountain granite only a week prior, re-opening a huge gash on my right knee. 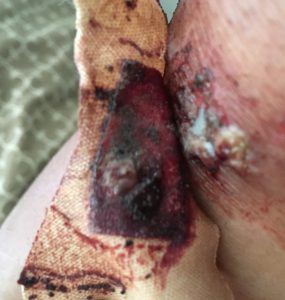 The course was divided into 4 sections allowing either relay teams or solo; I participated as the latter.

The very first section of the race provided a gentle entry starting relatively flat; however, it was only seconds in that I fell into the gravel pebbles landing fiercely on my right hand. “F&@* me!” Runners asked if I needed help, and I brushed them off. It’s a race. “Don’t stop; move on!”

I got up as quickly as I could. If one falls, bounce back more fiercely. Go hard or go home.

Blood was gushing out of my hand. I attempted to fight tears from the burn. I did not want the bright red blood to clot onto my new Under Armour skort. I had already ruined my favourite LuLulemon capris tripping in Squamish.

The flats were short-lived; it was time to start climbing. We passed the perimeter of the suspension bridge tourist attraction before running up and down rolling hills in the luscious green Capilano Pacific trail to reach the Cleveland Dam. I decreased my speed, carefully avoiding knotted roots and loose rocks. 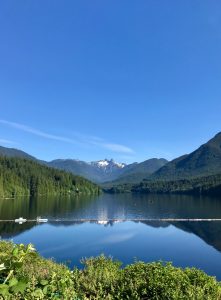 I panted heavily on the steep ascent, and wished I could meander to enjoy the beautiful rich emerald forest. However, there was no time to smell the Pacific Northwest’s woodsy tree trunk aromas or listen to the ebbs and flows of the rapid river currents.

We encountered multiple sets of wooden stairs before reaching the next phase. I was relieved no one was running, and easily assimilated with the walkers. Maybe the keeners sprinted with vigour, but these middle-of-the-pack racers, including me, slowed to a turtle pace. I reluctantly pulled up one lagging foot in front of the next to get to the next segment of the course.

I pulled out my iPhone to snap a picture perfect moment of the glorious sun’s rays shining on the athletes enjoying the very best of the North Shore’s natural wonders. 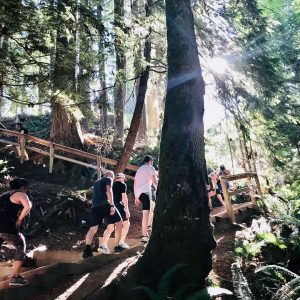 I was rejuvenated from the short reprieve from running. As a result, I was able to race up Capilano Road reminding myself how many times I biked and ran North Shore’s hills. I got this!

I forbid myself from walking until I reached the mountain base.

My legs sllll-oooooo-wwwwwww-eeedddddd feeling like dead weights as I entered Vancouver’s infamous tourist attraction, the Grouse Grind hike. I dragged my right foot, then my left, from one stone step to the next. I used my hands to propel me. My ears popped as the altitude changed as I ascended the trail. “Why was it excruciatingly uncomfortable despite my dedicated training?”

I was relieved as I passed each blue 1/4, 1/2, and 3/4 marker. My momentum accelerated with excitement when I climbed through the rocks at the Grind’s completion. Hallelujah! Nooo wait…there was one final precipitous ascent to ready the heavenly summit followed by a downhill to the finish line.

My legs re-accelerated as the loose gravel terrain flattened for the last phase. The relief was short-lived, and the mountain steepened again. It was only in early May, 7 weeks ago, that I downhill skied from the Peak of Vancouver enjoying panoramic views of the city below.

I alternated from racing bursts to a geriatric’s pace. I tried to find a target to follow or surpass to motivate me. Competing with myself was becoming tiresome. Apparently another female participant followed the same methodology. We alternated bypassing each other, playing catch up, and at times bumping into each other apologizing profusely.

Reaching the summit was a BITCH.

It crossed my mind to turn around. What was I trying to prove? I fought physically, but the battle in mind was the biggest obstacle. I did not need to ascend anymore. The honest competitor in me reminded myself of the racing mat at the top to collect my time accurately. It was a letdown to discover there was no visual timing chip at the summit. I had envisioned bouncing on it, similar to a sugar-laden child on a trampoline, throughout the race.

One would assume that the descent would be a sweet breeze. It was not. I could not fly down the steep gravelly ski hill and risk another brutal fall. I descended with trepidation and heavy quadriceps, observing the steady flow of climbers. The competitors became more sparse as I neared the bunny hill. I was unsure where to go except to allow my ears to follow the echoing music and cheers from the chalet finale. I pounced ahead feeling rejuvenated knowing I had almost achieved my goal and would soon receive a shiny medal with pretty pink ribbon around my neck. Bliss engulfed me. 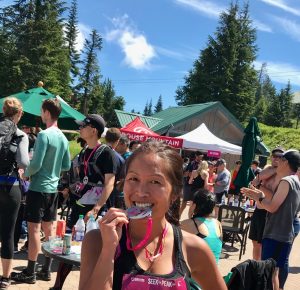 The best and worst part of the race was finishing and stopping. My muscles seized and the longer I stood still, it became more difficult to move. I could not depart immediately for the gondola to the mountain base because I could not put pressure on the sole of my foot. I had alternated running and hiking for almost 2.5 hours, but ironically, I could not walk.

I lingered while waiting for my massage trying to ignore the pain at the bottom of my left foot. I awkwardly pulled off my runner as my foot swelled, and watched the awards ceremony. I flinched. I could not confidently confirm from pain or ego deflation. I watched the youth and the senior women’s receive their awards. Both categories ran faster than me. A 70-plus female geriatric whooped my ass.

That lady has only pushed me to challenge myself further. I have every intention to race the Seek the Peak again in 2019 with the hopes of improving my time.

“For My dear friend & superhero, Ned. 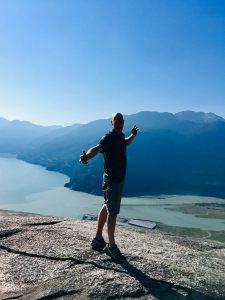