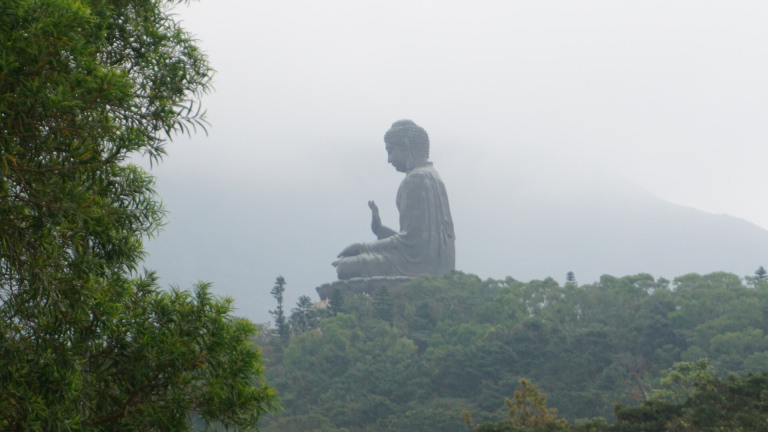 The highlight of my visit to Lantau Island in the New Territories of Hong Kong was Tian Tan, a majestic 34-meter bronze Big Buddha. However, there’s so much more to the island than this popular tourist attraction. I had eagerly anticipated this day for months. Unfortunately, I did not get to enjoy every attraction on Hong Kong’s biggest island, but that only means I need to return in the future.

My friend and I started our journey from Tsim Sha Tsui in southern Kowloon via the MTR, Hong Kong’s economical public transportation light rail. We weakly attempted to find the 23 bus at the Tung Chung depot, but were too impatient. My travel companion equally earnest to visit the towering Buddha, noted the 23 bus was not coming, but in reality, we had only waited a short 4-5 minutes. I originally dreamed to hike the steep trail to Lantau Peak, enthused to momentarily escape the frenetic energy of Hong Kong’s metropolis. Instead, we sat for 20 minutes with four random strangers in the cabin of the Ngong Ping 360 gondola to reach the village. The 6-kilometer cable car journey immediately offered expansive breathtaking views of varying bodies of water…Tung Chung Bay immediately within our eye gaze, the South China Sea, and the Pearl River in the distance.

The six of us all gasped collectively shortly after being seated, witnessing a remarkable part of China’s journey into the future. We were in awe of the impressive newly built, yet sparse bridge link near Hong Kong’s International Airport. It was the grand opening of the world’s longest sea bridge spanning 55 kilometers tying Zhuhai, China, to its two Special Administrative Regions of Macau and Hong Kong. The Chinese President Xi Jinping was in the country’s southeastern region for the ceremonious inauguration.  Finally, we witnessed one lonely car.

Our day of sightseeing was expensive with the entertainment and transportation value of the gondola. The monetary cost provided a juxtaposition of skyscrapers and the island’s tropical paradise surroundings. My cable car ticket did not seem so pricey when comparing it to the sea crossing’s unfathomable $20 billion USD cost. I have never been a big fan of “boring” politics, but the makings of this the causeway had been filled with controversy, over-expenditures, death, and corruption.

My eyes gazed upon jeweled greenish blue water and luscious forest foliage with a melodic waterfall humming in my ears as the sky ride traveled further up the mountain.

I was excited to observe sprightly hikers who looked eager rather than haggard, winding up summit steps of Phoenix Mountain. I tried to stifle back my disappointment of not fulfilling my ambitious goals to explore the trail head. I reassured myself; another time.

The Big Buddha set below dreamy clouds tantalized us in the distance. It was everything that I imagined it would be.

After disembarking the gondola we walked through touristy Ngong Ping village and past cheesy statues, and Starbucks, the epitome of urban life. Of course, we stopped to gawk at posers taking selfies, and repeated their actions.

We climbed a couple hundred manicured steps to get closer to the gigantic Buddha.

Despite the crowds of tourists chattering in multi-languages and a drone that buzzed in the grey overcast skyline, I felt peaceful and harmonious next to the religious statue set high above natural surroundings.

We descended the statue’s steps meandering to Po Lin Monastery and temple. We redeemed our vegetarian meal included in the price of admission to gain closer views of Big Buddha and intricate accompanying architectural embellishments. We were surprised when the staff forcefully over-served us despite our best attempts to explain we did not want that much to eat, and annoyed to be charged again. There is spirituality, and then there is the financial gain of religion. More food (dumplings, noodles, desserts) went into the garbage than in our already full stomachs.

The monastery flooded me with nostalgic childhood memories of my grandmother, Pau Pau, and Buddhist prayers. During special occasions, we would pray to 3 Gods with the pungent smell of incense wafting in the air. My Pau Pau set the dining room table with sweet fruits including brightly coloured oranges, alcohol, and delicious cooked meats. We bowed with reverence to our ancestors before we indulged in our dinner.

My friend and I made a conscious decision to skip Tai O fishing village, famous for stilt buildings, as time had escaped us. We attempted to hike down, but it was an arduous attempt for my friend to ascend the steep earth in high humidity to Lantau Peak. The Wisdom Trail path move upwards before it carried onto rolling hills that descended to sea level. I adored every moment of the scenery; my senses soaked in the fragrant blooming flowers that overlooked impressionist vistas. After 40+ minutes of heavy cardiovascular action, we we retraced our steps back to the Big Buddha grounds. Our mission was aborted.

Our heartbeats returned to a restful pace as we made a leisurely stroll through the courtyard detouring back to the easier gondola down to the bottom during the golden hour. I allowed the sun’s rays to kiss my soul as both the sun and cable car slowly retreated for the day.

I witnessed picturesque scenery of magical Lantau Island. I hope these images will be forever ingrained vividly in my mind, but I suspect my memories will fade in time similar to a landscape painting typical of classical Chinese silk artwork. I now understood why Asian painters use watercolors with wide brushstrokes similar to calligraphy as a medium. It creates a soft dreamy atmosphere that I was fortunate to experience.