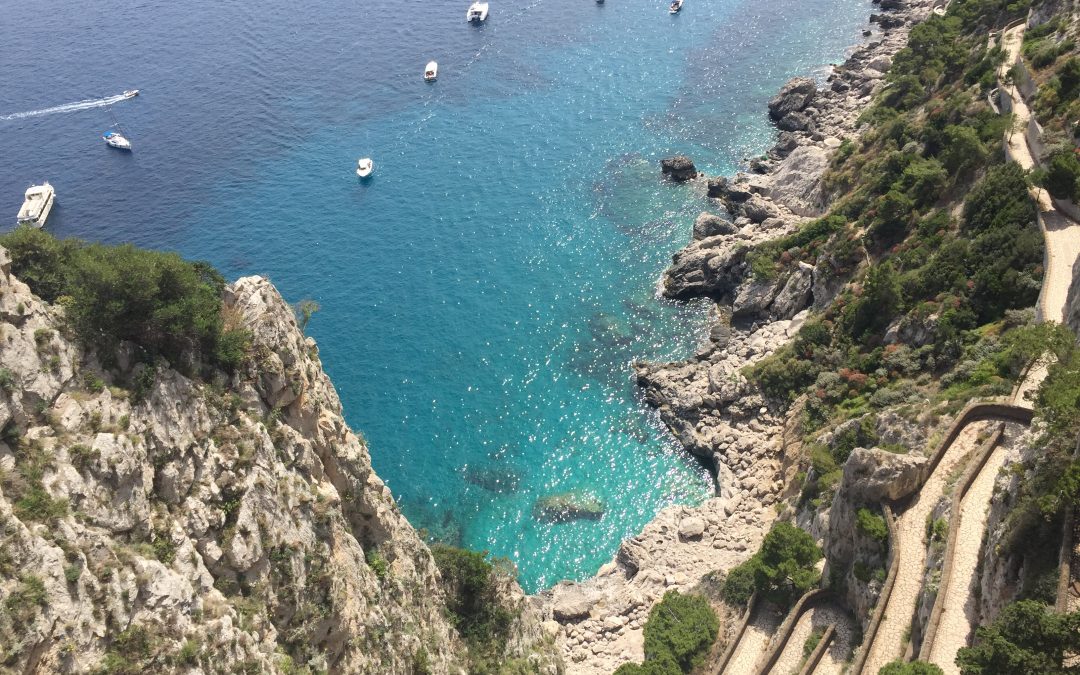 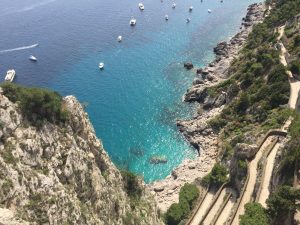 After five days of pleasant walks, sightseeing and delicious food in Rome, my wife Paula and I made our way to Naples, where we had a rented car waiting for us near the central train station. It was June 2018 and a few hours after that we’d be arriving in the legendary Amalfi Coast! 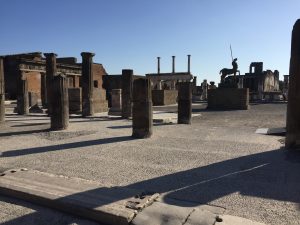 The best part of coming from Naples is that Mount Vesuvius and Pompeii are both along the road that takes you to the coast, and you can actually visit both sites in just one day (given that you take off from Naples in the morning).

The ride along the A3 road is smooth and you shouldn’t have any problems finding the Vesuvius National Park with an updated sat nav. Prepare your leg muscles, because you’ll have to walk a few miles up to the top of the crater (a van drives you part of the way).

The sightseeing is wonderful and you can take really nice pictures from there. But I was a little underwhelmed by the fact that Vesuvius doesn’t have any volcanic activity (shouldn’t I be glad?).

On the other hand, Pompeii gave me the chills! I was already expecting to see the site well-maintained, but the fact that the whole city structure is completely intact blew my mind. It was like travelling back in time to see the magnitude and influence of the Roman Empire.

I learned that the volcanic smog from Vesuvius had covered the whole city, and that is why it was so well conserved until the 18h century, when explorers discovered the site. I really think that, if you had to choose between them, Pompeii is the one you cannot miss!

In the evening, we finally arrived at our Airbnb place in a little town called Sant’Agata Sui Due Golfi, that lies on a hill between the gulfs of Naples and Salerno. We stayed in a fine house whose owner was an adorable Italian mamma.

This little town is near Sorrento and the accommodation expenses were much lower than it would have been in the main touristic places.There are a lot of good and affordable restaurants along the main street. I recommend the Ristorante Da Mimi (taste the manicaretti!). 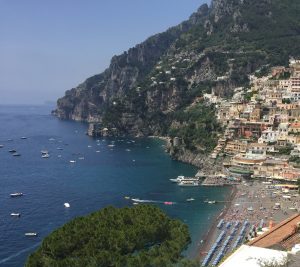 On the second day, we were already comfortable driving in the region and with the few mishaps we encountered along the way, such as taking some wrong turns or finding appropriate parking. The streets are very narrow and the traffic can be a little bit chaotic, but it’s nothing you can’t handle.

Our first destination along the Amalfi Coast was Positano, the fanciest spot in the region. On the way there, we made a lot of pit stops at the parking areas near the cliffs. It’s an intense experience to admire the beautiful coast and to feel the wind blowing under the hot sun. The granita di limone sold at these spots must not be missed.

Once we were there, we walked on foot to the city center and its narrow alleyways, eating fresh fruits and drinking cold beer at the same time. I believe the best thing to do in Positano is to admire its beauty. We stayed there for about three hours, exploring the sights and walking on a paved track that goes around the coast.

Right after Positano, we stopped by a little restaurant in Amalfi to have lunch, and made our way to Ravello, high above the Amalfi Coast. It’s a UNESCO World Heritage Site that has been the destination for artists, writers and musicians like Truman Capote, Richard Wagner, Jacqueline Kennedy and Humphrey Bogart, who shot a film there entitled Beat The Devil, (directed by John Huston).

There’s a music festival that takes place in the summer, called Ravello Music Festival, and a lot of classical music is played all the time at the cafes. The place is great to have a coffee, beer or gelato (or all of them) while you watch the sun go down. 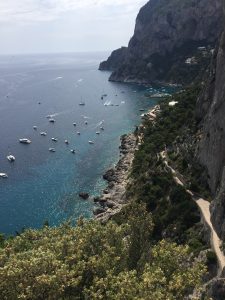 Our third day on the Amalfi Coast was a little less crowded than the day before. We woke up later than usual and went to Sorrento, to buy ferry tickets to Capri for the next day.

After purchasing the tickets, we made our way to the city’s historical center, which is full of shops, where we bought some locally crafted products, and the delicious limoncello. The rest of the day was spent riding the car along the beautiful sights between Sorrento and Sant’agata, making a lot of pit stops for photos and a picnic.

On our fourth and final day, we finally went to the island of Capri! If you decide to visit the Amalfi Coast, Capri is the place you should not miss. Since we were not going to spend the night there, we took off early in the morning, in order to make the most of it.

Like Positano, Capri is an expensive place to eat and drink, but you’ll be able to enjoy it quite a lot, even on a budget. You should begin exploring the island from the Piazzetta Umberto in Capri (get a map once you arrive there). To get there from the Marina Grande, you can take the funicular or walk up the stairs, like we did (it takes half an hour).

Capri has a lot of hiking paths and they are spectacular. We chose two of them to explore: the ones to Villa Jovis and to the Arco Naturale. These two paths took the whole day to cover, and there were a lot of beautiful views, cliffs, forests, caves and beaches on the way, along with pit stops for beer, granita and shopping.

The path to Villa Jovis led us to the ruins of a Roman palace owned by emperor Tiberius, from where you can see the Gulf of Naples. There’s a clifftop villa there, and also a precipice called Tiberius Fall, a place where the tyrant would dispense of disobedient servants and enemies.

From this site, we took the hiking trail to the Arco Naturale (a big natural arch formed  by the erosion of limestone) and the Faraglioni (an oceanic rock formation eroded by waves). Finally, we went to the Giardino di Augusto (Gardens Of Augustus) to admire the Marina Piccola view, had a  rest and got back to the the Piazzetta Umberto, where we enjoyed the final hours on the island of Capri.

Well, that’s it. We obviously didn’t cover everything the Amalfi Coast has to offer. We didn’t have the time to hike on the Path of the Gods, to visit Salerno and Praiano, or the rest of the island of Capri.

The good news is, we have lots of reasons to visit the Amalfi Coast again!

What about you? Any doubts or suggestions about this trip? Let us know on the comments below!